We set out across the Gulf of Oman not long after sunrise on the shortest day of the year: the sun low in the sky; the sea like glass; the horizon hazy in the early morning light. We were the only passengers and, as our captain was dubbed the dolphin whisperer, we embarked excitedly with a promise of a 90% chance of seeing at least one of three types of dolphin.  Crossing the open sea with the sun on our faces and the breeze in our hair, at times hugging the rugged coastline, at others weaving between the mighty tankers being slowly towed to port by tiny tug boats, always with an eye on the horizon, hoping for a glimpse of a pod of dolphins leaping through the air – it was idyllic. 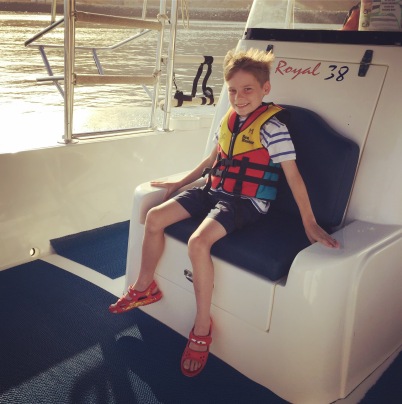 Well, it sounds idyllic, doesn’t it?

However, we all know that the reality of travelling with children isn’t necessarily reflected in the Instagram show-reel… We had only enticed our youngest pizza-fan, until recently phobic of boat travel, to go on the trip with the (false) promise that it wasn’t a speedboat (it was), it wouldn’t go fast (it did) and it would be worth it as we would see hundreds of dolphins (well, we didn’t). Ah. All was calm as we puttered out of the harbour and turned towards the sea and, well, you can imagine the scene as the captain opened the throttle and set off at breakneck speed across the ocean.

It truly was a beautiful morning – the coastal scenery was incredible and we were so lucky to be sharing the sea with just a few fishing boats, a string of towering ships heading slowly for shore and the gulls.  While we relaxed and took in the views, or huddled with eyes closed (guess who), the dolphin whisperer was hard at work. I’m afraid I have to shatter your illusions there too – his whispering ability was more a bellowing-on-a-mobile-phone ability, as he worked his way through the network of fishermen in his contact list to find out what they had seen that morning. The short answer was: nothing. We were about to be the 10%.

After a couple of hours, disappointed, we turned and headed back to harbour, stopping in a remote, sheltered bay of coral reefs teeming with tropical fish in lieu of our dolphins. It was a special moment and made up for the lack of dolphins. Satisfied, we started the engines to head for home. Just then, the captain’s phone buzzed. A fisherman far out to sea had just come across a pod. “Hold on, we have to go fast!” he cried. And go fast he did. Littlest pizza-fan’s face was a picture. Oops.

After about ten minutes, we slowed. The engines were cut and the captain pointed ahead of our boat. We drifted a safe distance away from one of the most remarkable sights we have ever been lucky enough to see. A large pod of sleek dolphins moving away from us, propelling themselves up and down through the clear waters further out to sea. I don’t think anything can prepare you for seeing these majestic creatures in open waters. We simply watched, awe-struck, for a few minutes as the sun glinted off their wet skin and the rise and fall of dorsal fins increased the distance between us, before starting the engines again and heading back to shore.

We may not have seen many, but sitting quietly for those brief moments in the morning sun, surrounded by blue silence and watching the dolphins gliding away from us,  was a privilege. The dolphin whisperer had worked his magic after all.